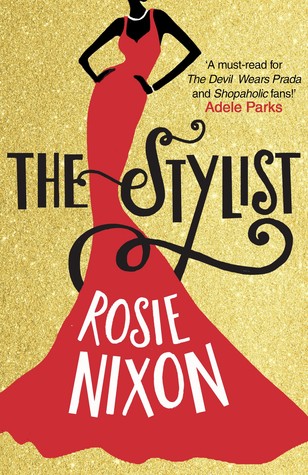 When fashion boutique worker Amber Green is mistakenly offered a job as assistant to infamous, jet-setting ‚stylist to the stars’ Mona Armstrong, she hits the ground running, helping to style some of Hollywood’s hottest (and craziest) starlets. As awards season spins into action Mona is in hot demand and Amber’s life turned upside down. Suddenly she catching the attention of two very different suitors, TV producer Rob and Hollywood bad boy rising star Liam. How will Amber keep her head? And what the hell will everyone wear? The Stylist is a fast-paced, fun-packed rummage through the ultimate dressing up box.

The first thing that I’d like to say is that I – truly – haven’t expected „The Stylist” to be so damn great read! Yes, it somehow reminded me of „The Devil Wears Prada” but this book has its own distinctive voice and its own brilliant characters, and I adored that it focused around award season in Hollywood and London, such as Golden Globes, the BAFTAs and, of course, the Oscars – ha, who doesn’t like some celebrity spotting?

This book was truly fast paced, there was not a single flat moment, and the idea for it was genius – a girl, who in fact doesn’t know much about fashion, finds herself on the red carpet, getting an assistant stylist job. Simple and yet creative. But of course not so easy for Amber Green (yes, just like the traffic lights!) – we can think what is there to the job, choose some dresses, shoes and ear – rings, but it turns out that there is much more to it, and you must also be a therapist, psychologist, a bank, mini pig – sitter and taxi, and often pull out the stars from troubles.

It was crystal clear that Mona is going to turn out not like she’d like people to perceive her. I quickly started to dislike her, even though I always felt some kind of pity for her, although I couldn’t stand when it was Amber doing all her job. She was, in fact, high there on the list of no – go bosses, together with Miranda from „The Devil Wears Prada”. I think she would do anything to only survive in this fashion industry, no matter what and no matter for what price.
There were moments that Amber’s never – ending inability to say NO was truly getting on my nerves. But apart from this, she was a truly likeable character who always gave her best. I really liked that she decided to grab life by its horns and throw herself in at the deep end, as more than knowing her fashion, she was rather better in steaming the clothes that they were selling in the boutique. She was likeable, realistic and a great fun.

I also liked that the book took as on a journey – literally – almost around the world. We were in London, in LA and there where the place where the sun always shines and there are beautiful beaches, and – as opposed to the poor Amber, we could really marvel at the views and enjoy the descriptions of the places. Because yes, Amber needed to concentrate on never – ending emergencies. Moreover, I am not so much myself into big fashion and I don’t faint over dresses presented on the red carpets, but Rosie Nixon can for sure describe the gowns and accessories.

There is of course a romance aspect to this book, and while this with Liam seemed a little too far – fetched, the one with Rob was just my cup of tea. It was not so straight – forward and the author made it a little complicated, and truly, I didn’t know how this storyline is going to end – yes, we are in for some surprises in this book!

Altogether, it was a light, easy to follow, enjoyable book with some twists and turns, written in a very engaging, forthcoming way. It was fast – paced and full to brims with great characters, all of them nicely developed, and one of them the mini – pig Pinky, who turned out to be a very significant character in the end. There is really no time to come out for a breath, as there is always a crisis or two, damp down emergency involving Hollywood’s biggest stars, and yet it is not overwhelming, it flows in a very easy, natural way. The author has truly captured the spirit of the fashion industry, with all the feelings, such as jealousy, envy, disbelief but also pride, and greatly pictured industry where appearances are everything, and she also gave personalities to the A – listers in this story, they were not all the same, and showing the other side of being a celebrity as well. The writing style was brilliant, so engaging and witty, and easy to follow, and the humour in this book is so natural and not at all forced. I particularly enjoyed the „behind – the – scenes” parts at the biggest awards there are. So really, this is a great debut novel, with larger – than – life characters and Rosie Nixon effortlessly brings them all to life – you could totally imagine them behaving the way she has described. It is a must – read for all the fashionistas out there, and not only, as I am sure everybody is going to find there something to love.