The Woman Who Upped and Left 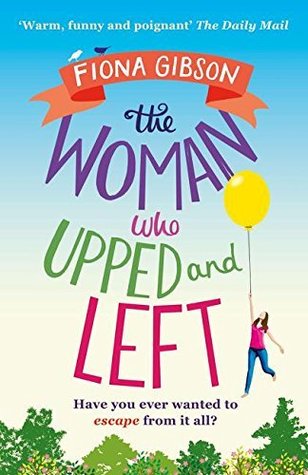 **The laugh-out-loud bestseller is back with the only book to buy this Mother’s Day. Perfect for fans of ‘Outnumbered’ and Carole Matthews, Fiona writes about life as it really is.**

Forget about having it all. Sometimes you just want to leave it all behind.

Audrey is often seized by the urge to walk out of her house without looking back – but she can’t possibly do that.

She is a single parent. She is needed. She has a job, a home, responsibilities…and a slothful teenage son’s pants to pick up.

But no one likes being taken for granted – Audrey least of all – so the time has come for drastic action. And no one’s going to stand in her way…

Every year I am impatiently waiting for Fiona Gibson’s new release – I fell in love with her down – to – earth, normal heroines, with down – to – earth stories that are about everyday life and yet that are incredibly funny and uplifting. I also think that Fiona’s covers are the most beautiful ones, and this time it’s the same – it is colourful and optimistic, and I also immediately fell in love with the title of this book – it’s brilliant! Also, the tagline on the cover: „Have you ever wanted to escape it all?” had me hooked, as I think that most of us wanted once or twice to leave everything behind, stop thinking and just go away. So with this brilliant, promising synopsis I started to read the book as soon as it hit on my doorstep. (But in the meantime I have cooked with Fiona

However, sadly, this time the book didn’t deliver this what I am always expecting from this author. I loved the idea of the woman who upped and left and I thought we are for exciting adventures and changes generally speaking, and I’ve just imagined something different to this flat, lifeless heroine who was undermining herself and who was a servant to her son. I get it, this with Morgan was probably supposed to be funny, but for me it was more like a farce, and as much as I appreciate that present teenagers live with their parents till they’re thirty and don’t go to work, Fiona Gibson has taken Morgan to totally different level.
Sure, I think there is not a single mother who wasn’t at least once like Audrey, thinking about leaving and doing something for herself only and not fretting over what she’s left behind, and this was brilliantly described. However, having the title in mind, I was expecting Audrey to leave literally everything and go on the adventure of her life, and not only on a one week course in a French cuisine, only to come back home to the same old life – to her über – lazy son and picking up his pants. She was too passive with everything in my opinion, and I though that when she once more says „dear” or „love” to her son, I’m going to start to shout.

I am really sorry, but I am a little disappointed with this story, I have expected much more from this author and in my opinion it is her weakest book. But of course there are also some great things, first of all, Fiona’s ability into getting in the characters’ heads stayed the same. And it was like this with Audrey, I really felt I know her totally and yes, I liked her – apart from her being flat and lifeless, fussing about her lazy git of a son. I mean, I am also a mum, OK, my daughter is a little one, but I can’t imagine me behaving like Audrey. NO way, sorry Sophie, you’re going to be an independent, self – reliant person in the future. Audrey always tried to make best out of the situations she found herself in and she felt really realistic, with all her flaws. Like other characters in this story as well. But I think that a lot of women can identify and relate with Audrey and it’s going to be one of the strength of this book. She has appreciated the smallest things and this made her really charming person. I also liked her normality, the fact that she was having two jobs just to make the ends meet, and she was great in both of them, which shows how brilliant she was around people and that she really, truly cared about them. She was also so honest and genuine in all her reactions, she was enthusiastic and yes, sometimes she just wanted to disappear under the pillow, but it only made her even more authentic.

The author also tried to add some humour through Audrey’s affair with Stevie, though right now, in retrospective, I’m not sure if I should laugh or cry at our heroine, chucking everything the moment Stevie let her know he’s available and they can meet – somewhere in the motel on the motorway. I mean, can a person be so desperate? But I really appreciate the fact that the romance aspect has not dominated the whole story, and forgetting about being desperate or not, it brought some great, hilarious and funny scenes to the story. The „second romance”, well, this I’ve seen coming, but I liked how Fiona Gibson managed this subplot – not too much, not too less, and very charming – although I must admit that the author has muddled me up a little, as according to all indications Audrey was interested in someone else.

Altogether, „The Woman Who Upped and Left” was a light and relatively quick read. I liked that even though there is food in the story, it didn’t overwhelm the whole plot, and I truly enjoyed Audrey’s stay at the hotel, together with her mania of hiding all the chocolate truffles for her friends and with her obsession with the mini – bar. The interactions between Audrey and Morgan felt really realistic, it was just like watching a Wimbledon final, as the ball was once on Audrey’s, and the second moment on Morgan’s side. There is also this cosy feeling in this story that – brushing aside all the problems that I had with it – made the book a hilarious comedy of errors and I enjoyed Audrey’s journey to finally, eventually find herself.