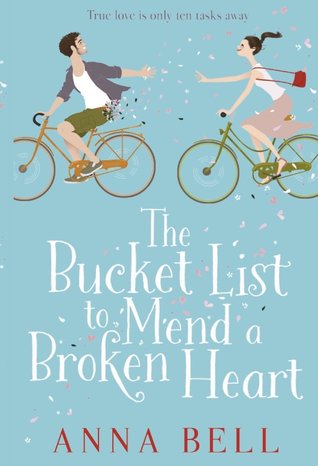 A hilarious new romantic comedy for fans of Lindsey Kelk and Jane Costello from Anna Bell, the bestselling author of Don’t Tell the Groom. Abi’s barely left her bed since Joseph, the love of her life, dumped her, saying they were incompatible. When Joseph leaves a box of her possessions on her doorstep, she finds a bucket list of ten things she never knew he wanted to do. What better way to win him back than by completing the list, and proving they’re a perfect match? But there’s just one problem – or rather, ten. Abi’s not exactly the outdoorsy type, and she’s absolutely terrified of heights – not ideal for a list that includes climbing a mountain, cycling around the Isle of Wight and, last but not least, abseiling down the tallest building in town …Completing the list is going to need all Abi’s courage – and a lot of help from her friends. But as she heals her broken heart one task at a time, the newly confident Abi might just have a surprise in store …

Oh guys, a new novel by Anna Bell! What a treat! As soon as I learnt that „The Bucket List to Mend a Broken Heart” is going to be published in March, I started to count the days to the publication day. I was lucky enough to receive a review copy, and as soon as I got it in my hands, I put everything away and started reading it – after reading Anna’s Penny’s books, this author is on my auto – buy list – I love her writing style, her humour and how effortlessly the stories go. And I am so glad to report that this brand new shiny novel is just the same brilliant as Anna’s previous ones.

First of all, I love the cover of this book. This blue colour is gorgeous, and I am a real sucker for such optimistic, girly covers. So there. Shoot me. Then the idea of this book is just brilliant, don’t you think? I love lists, as long as they are not mine and I don’t have to do anything that is on them, and – YES! – we have a list in this book. And not your normal bucket list, but somebody else’s list, namely Abi’s ex – boyfriend’s Joseph. To cut a long story short after Joseph split up with Abi, just like that, claiming that they’re not compatible, to say that Abi was upset would be an understatement. She was DEVASTATED. And so when she stumbles across Joseph’s bucket list she immediately knows what she should do – show Joseph that in fact she’s a very adventurous person and complete the list. Why adventurous? Well, because the list consists mostly of outdoor activities, and there is nothing better for Abi than to curl up on the sofa with a remote in her hand. But what a girl wouldn’t do for her boyfriend…! And Abi is sure that after completing the list Joseph will take her back.

What is so great about this idea is the fact that it is based on the author’s own experiences, as she also tried to do things that were on her ex’s bucket list. As much as Abi didn’t need to try to impress Joseph, who, notabene, I really didn’t know what she sees in, as he was arrogant and cold type, not mentioning here his self – important family, I loved following her on her adventure. The idea of completing someone else’s list was absolutely brilliant for me, and different to everything I’ve read in the books so far. On the other hand, why should you want to impress someone who doesn’t deserve your attention, right, why not do it for yourself only, but okay, let’s forget it for a while – and it was really brilliantly captured how Abi changes, not only physically, but also mentally, as she not only learns how to ride a bike again (thought they say that once you’ve learnt riding a bike you’re not going to forget it – although I am more like Abi here. As far from bike as possible. Give me a horse more like) but she also learns a lot about herself and overpowers her own fears (like abseiling down the Spinnaker with her mahoosive fear of heights, windsurfing in a cold water (oh God. Guys. How much I laughed when Abi tried to learn windsurfing) and climbing one of the four peaks, and in the meantime there is also a little romance brewing. Because is Joseph really The One? And Ben, the new friend who offered to help her with the challenges, well, he has a girlfriend already, right? Much more outdoorsy type than Abi. So what now?

I absolutely loved the story of Abi, her overcoming her own weaknesses, coming out of her comfort zones in the company of her friends – old and new ones… What I particularly liked was the fact that the author didn’t concentrate so hard on the challenges themselves and didn’t bombard us with thousands of details about them. She usually introduced us to the challenge but didn’t focus on describing the whole 10 hours of cycling over Isle of Wight, and I find it’s absolutely okay, because where something significant happened during one of the challenges, she of course let us know about it.

Abi was the perfect heroine and I immediately warmed to her, even though I sometimes wanted to shake so, so much – I mean, she was a clever, funny girl, so why this desperate need to change herself into someone else? She was great as she was, but on the other hand I loved to see how she gradually realised her hidden strengths and powers and how she overcame her terrors.
But not only Abi was a great character – all of them were so vivid and I loved to get to know them. No matter if they were background characters or the main ones, the author gave them their own personalities and distinctive voices and they made a great bunch of characters. You just felt that they liked each other and felt well in each other’s company, and they provided some of the greatest one liners – the dialogues were so spot on, so up – to – date, and they often made me laugh – they were written in this lovely, easy Anna Bell’s style, and the author has already found her trademark, her own voice that I really love. She makes the stories so easy to follow and reading her words is a real pleasure and relaxation.

As Abi wants to get Joseph back as soon as possible, she decides to do the list also as soon as possible – hence the pace in the book is really quick! There is always something happening, but not only on the list – front, but also at Abi’s job, where a new colleague seems to be the boss’s pet and Abi can’t trust her, especially as someone is sabotaging her work!

There were only some moments in the book when I thought I’m going to start to scream if Abi will mention again that she was doing this for Joseph – too much and too often! I wasn’t able to forget that Abi Is Doing It For Joseph only, it has really stuck in my memory for ever. And sure, it was a rather predictable read but nevertheless, this predictability here felt so comfortable and I couldn’t wait to finish the book and see the happy end for myself. Sure, the author made this way to this happy end complicated, which only added so much to me enjoying this story so much. It was an easy, light – hearted read and if you haven’t read Anna Bell’s books before, I urge you to reach for them as soon as possible! Make it a priority on your own list! (And no, even though I feel inspired by Abi, I didn’t create my own bucket list