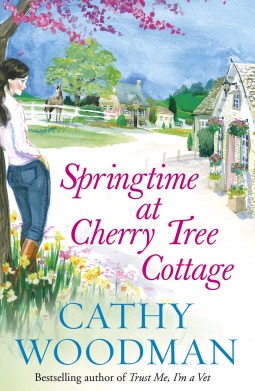 It’s not easy being a female in a male dominated world, but Flick is more than up for the challenge. But is Talyton St George ready for her?

After years of training, horse-mad Flick has finally achieved her dream of becoming one of the few female blacksmiths in the country.

Her first job is in Talyton St George. The little cottage on the green where she is staying is idyllic, but she soon finds that the locals are sceptical about her ability to do the job, and she has to work twice as hard to prove herself.

Stunt rider Robbie Salterton is a bit of a local celebrity. He’s gorgeous, a devoted single father and gives free riding lessons to disadvantaged children in his spare time. In addition, he’s one of the few men in the village who doesn’t doubt her skill. Can one man really be that perfect? Flick’s not so sure.

However, the more she gets to know him, the more she realises he’s everything he seems to be. But with his legions of glamorous women vying for his attention, what on earth would he see in a tomboy like her?

Since I’ve discovered the Talyton St. George series by Cathy Woodman, I am always looking forward to a new release. I haven’t read all of the books but the few that I’ve read made me fell in love with the place, with Ms Woodman’s writing and it is always a great feeling to be back to this lovely village – you could think, a small place, but there are so many things happening, right?

What I so adore in these books is the fact that each story introduces us to new characters, but some of the past characters and places are always a part of the book, and spotting them always makes me smile. This time „Springtime at Cherry Tree Cottage” introduces us to Flick and Robbie, both madly in love with horses – which I, personally, adored, as I am also mad about horses and I thought, finally a book for me! Flick has just passed her tests to become a farrier and is new in Talyton, working as a replacement for a local farrier Mel who’s due a serious operation. She isn’t looking for new friends or new love, as she’s recently broken up with her boyfriend, and the only thing she wants is to work and to have a place for her adorable horse Rafa. Robbie is a stunt rider, he and his brother have their own school and they often work for films, but apart of this Robbie has his own issues as well – he is a single dad to Maisie, as her mum has died giving birth to her. The story then follows those two, Flick trying to break new ground and prove she is as good a farrier as a man, and Robbie training his horses, and of course the paths of these two cross, earlier rather than later.

As much as I liked Flick, she was just a girl after my own heart, she also annoyed me incredibly occasionally, especially with her attitude towards Robbie’s being a single dad. I think it is very clear for all that being a single parent is not easy and that the whole world centres around this child, whereas Flick couldn’t understand this at the beginning, and truly, when she was unhappy with Maisie’s presence, or when she wished for Maisie to disappear, I just wanted to shake my head and tell her to grow up and stop behaving like a spoiled child – Robbie has his priorities. On the other hand, I also wanted to slap Robbie when he – deliberately or not – made Flick feeling like a third wheel. But altogether, these two worked together in a brilliant way, although there were moments that I wanted to bang their heads first together, and then separately on the wall, as they were stubborn and they were immediately jumping to – wrong – conclusions. Especially Flick. But altogether, the characters were so lovely, and I really felt great in their company. I kept my fingers crossed for them, I applauded them and I also felt angry with them – and I love when the characters make me do this. They were full of life and they acted in a way that was so normal and realistic. They had their own problems, they weren’t flawless, and each and every one of them had their own place in this story.

I absolutely, totally adored the way the author described horses, the way they’re acting, their faces and how they always try to find something to eat. You can really see that she knows what she’s writing about and that she loves horses – there is a lot of feelings to them in this book. But back to being mad about horses. Like, totally mad. As much as I adore every mention of this animal in the books that I’m reading, here the author took them to a totally different level, I think. She really knows her shop, and some of the information about farrier’s job were new even for me, but there were moments that even I, the total horse freak, felt a little overwhelmed with the very detailed information about making a shoe and about every single requirements that you must fulfil to be a farrier. This book really focused hard on Flick and her being a ferrier, and I am only a little afraid that for people who are not as much into horses it might be a little too much. I’d also like to see a closure to the fact that Flick has been financially deceived by her ex – boyfriend.

The pace of the story is just right, it’s not too quick and not too slow, just like I imagine life in Talyton St. George to be. There is warmth to the writing style and a lot of passion in the words, and even though not only good things happen in this story, it had this lovely feel – good factor that makes reading so enjoyable. The dialogues were realistic, they felt like they were taken from everyday life, and Flick’s internal monologues were brilliant. There couldn’t be a village life without a festival or two, and we also have them in this story, and they were lovely described. And the book is not only about horses and people being mad about them, but it also touches upon some really important, difficult and sad issues, such as autism, difficult relationships with parents, disappointments and hopes, betrayal. Altogether, „Springtime at Cherry Tree Cottage” is all what I’ve expected from this book – engaging story with lovely characters, interesting plot and full of animals. Just what the doctor ordered. Recommended!