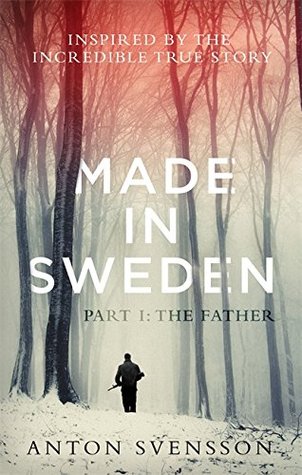 How does a child become a criminal? How does a father lose a son?

An epic crime novel with the excitement of Jo Nesbo’s Headhunters and the narrative depth of We Need to Talk About Kevin, The Father is inspired by the extraordinary true story of three brothers who committed ten audacious bank robberies in Sweden over the course of just two years.

None had committed a crime before. All were under 24 years old. All of them would be changed forever as individuals and as a family.

This intoxicating, heartbreaking thriller tells the story of how three boys are transformed over the course of their lives from innocent children to the most wanted criminals in Sweden. And of the man who made them that way: their father.

Once in a while I like to read something different to what I usually read, and mostly I reach for crime and thrillers. What made „The Father” so interesting and exceptional in my eyes was the fact that it’s based on a true story of three brothers who robbed banks in Sweden. and there was something really intriguing in this book, and even though it’s a fiction only based on facts I had a feeling it can be a really great story.

Yes, at the beginning I had some problems to get into the story. No idea why, maybe because it was so seriously written, I really don’t know, can’t put my finger on it. But one was clear from the very beginning: that it’s going to be a crime story with a difference. Leo involves his brothers and a childhood friend into very thought – over operations, bank robberies planned with a great precision. They name themselves The Military League because of the weapons that they have at their disposal. Detective John Broncks made it a point of honour to capture them. I found this book very intense and moving, as it was not a simple crime, as it also investigate into domestic violence.

The book jumps between present and past, and as Leo and Felix seemed to be all the time haunted by the shadow of their father, the getting back to the past helps us to understand why it is like this, and it also sheds lights on brother’s decision of taking this kind of „career”. Switching the viewpoints worked for me seamlessly and as it unveiled the boys’ tale about the domestic violence and the conditions they were growing up, I found myself more and more hooked into the story.

What was truly fascinating in this book was the way the brothers worked, how dedicated they were and how they concentrated on the smallest details. In the end they committed ten robberies in two years. Somehow I felt sorry for them, probably because of their childhood, somehow I was fascinated when reading this novel – it is really impressively written, and no matter what the author writes about, if it is the scenery or the preparations for the robbery, it is all vivid and brought to life.

It is a book about choices that describes the brother not only as criminals but also as victims, showing what pushed them in the direction of what they did. It’s brutally honest and occasionally violent but it is also incredibly hooking, and it shows how witnessing the violence in your childhood may turn your life into replicating the violence. The characters are very bold and expressive and even though I didn’t support their life choices, they grew on me and I ended feeling pity and sorry for them.

The descriptions were truly exceptional and incredibly vivid and the author has brilliantly brought them to life, you could feel the snow melting and hear the blood dripping, and also to read about the Swedish scenery was really interesting and made you feel a part of the book.

I think that what makes the book so gripping and exceptional is the fact that the author is in fact two persons: Stefan Thunberg, a very popular Scandinavian screenwriter, who is a brother of the true bank robbers the story is based on, so he was actually describing everything he witnessed, and the second author, Anders Roslund, is an award – winning journalist and crime writer. They created a compelling novel that follows the life of the violators who, in fact, may be considered as victims as well, because of their childhood. „The Father” is a tense and addictive story and what’s even better is the fact that there is going to be a follow – up novel in 2017, „The Son”. I was really impressed with this story. It’s gripping, thought – provoking and intense and fans of crime fiction shouldn’t miss this book. Even though it is a book based on facts, it was not a predictable read, it was more a very unique take on crime and everything connected to crime.