Summer at the Cornish Cafe 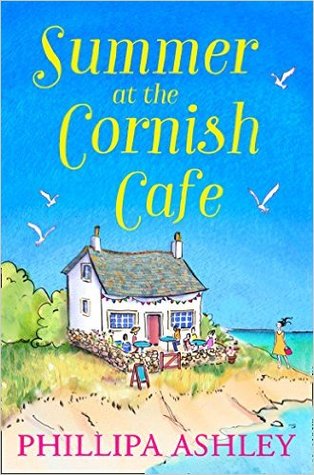 One summer can change everything . . .
Demi doesn’t expect her summer in Cornwall to hold anything out of the ordinary. As a waitress, working all hours to make ends meet, washing dishes and serving ice creams seems to be as exciting as the holiday season is about to get.
That’s until she meets Cal Penwith. An outsider, like herself, Cal is persuaded to let Demi help him renovate his holiday resort, Kilhallon Park. Set above an idyllic Cornish cove, the once popular destination for tourists has now gone to rack and ruin. During the course of the Cornish summer, Demi makes new friends – and foes – as she helps the dashing and often infuriating Cal in his quest. Working side by side, the pair grow close, but Cal has complications in his past which make Demi wonder if he could ever truly be interested in her.
Demi realises that she has finally found a place she can call home. But as the summer draws to a close, and Demi’s own reputation as an up and coming café owner starts to spread, she is faced with a tough decision . . .
A gorgeous story exploring new beginnings, new love and new opportunities, set against the stunning background of the Cornish coast. Phillipa Ashley has written a feisty, compelling heroine who leaps off the page and encourages you to live your summer to the full.
Recommended for readers who loved Summer at Shell Cottage, The Cornish House, Tremarnock and Poldark.

When requesting „Summer at the Cornish Cafe” I was expecting a novel full of sunshine, romance, changes and feel – good factor – the synopsis sounded so inviting, and the cover is gorgeous, right? I haven’t read any other books by Philippa Ashley, under this or other name (yes, I know. And I am ashamed!), which only added some excitement, so full of expectations I dived into this story. A story, that is the first part in the planned Penwith Trilogy.

However the title may suggest, cafe is not exactly at the heart of this story although it plays a big part in it. Because this novel is about many different things, such as new beginnings, old love, betrayals, bullying, hope, and it is written in such down – to – earth and engaging way that I really didn’t know when this reading time passed. Even though it was a rather predictable read, and a book that won’t change the world, it was a warm, delightful read and even though I had some issues with the characters (in a moment, in a moment!), I felt a part of this novel already.

What issues again, I can hear you asking. Some issues

As much as I liked the writing style, I couldn’t connect with the characters. They weren’t complex enough for me, and I had a feeling that we are not allowed to get to know them, that there are things at loose ends – maybe it’s because it’s the first book in the series, who knows – things that are mentioned and then forgotten or never mentioned again. Also, some of the characters were a tad too clichéd, too stereotyped for my liking, they were either very good or very bad. And I’ve never warmed to Cal, he was too moody for my liking and I didn’t like the way he treated people, so there. Yes, I totally understand where he was coming from, his background was complicated and we know that something had happened when he was abroad with his mission, but he’s bottling the things up and they’re probably going to explode one day, but nevertheless, in this novel we don’t know what happened and I just didn’t fell for Cal and his charm and, to be absolutely honest, I am still not sure if he can lay his past behind him . Demi, on the other hand, was great, I think there is much more to this girl than meet the eye and I am waiting impatiently to see if she hides any secrets, and also how the relationship is going to develop. Demi was also my favourite kind of character, the one that was developing and growing throughout the story, and I loved to see how her self – confidence is bigger with every page turned, and how inventive she is.

Also, the plot is lovely, but there is nothing that I can say I haven’t read before. We have girl – meets – boy subplot there, we have ex – lovers subplot there, we have jealous and rejected girl plotting a revenge there, and we have some pulling the rug out from under the characters’ feet, both love – and jobwise. There were moments that I was rolling my eyes, yes, I admit, but well, mostly I enjoyed reading this novel, and I liked these subplots. Especially the renovating of Kilhallon Park was a little breath of fresh air there, even though it was obvious that someone, sometime is going to try to harm Cal and Demi

The descriptions of the setting were lovely and so very vivid, and even though they were really detailed, I didn’t have a feeling, just like it often happens, that the author tried to fill the pages or that I was reading a travel guide. Phillipa Ashley had in a very colourful way described the beach with the shops, the cove where Demi liked to spend her time and finally the Kilhallon Park itself, and it also doesn’t happen often but I’d really like to see all of these places by myself – the author brought them life and made them feel so realistic. The story alternates between Demi and Cal’s points of view which I really enjoyed, as it gave us a chance to hear both perspectives, though, because of Cal being so closed in himself and not willing to open, I have a feeling that he didn’t tell us as much about his feelings as Demi did.

I think it was this lovely writing style and the way the story was told that saved this book for me. Altogether, it was a great summer read and it brilliantly captured atmosphere of summer, even though the story doesn’t only happen in summer – but I had a feeling that the sun is all the time shining when I was reading it, even though I was already in bed. Yes, it was a tad predictable, but there were still some twists and turns and I was not always able to guess what’s going to happen. It was easy to read but it also had some more depth to it and I truly appreciate the fact that the story hints at some darker things that happened in the past but will be revealed in the next parts.

One thought on “Summer at the cornish Cafe by Phillipa Ashley”