The Late Blossoming of Frankie Green 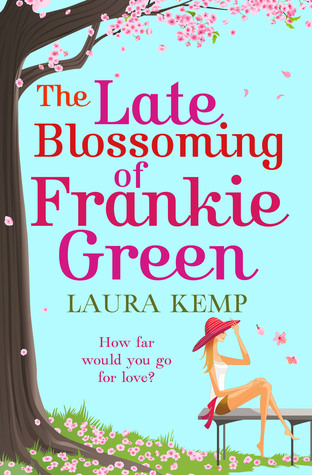 A laugh-out-loud, feel good, romantic comedy, which will take you on an enlightening emotional rollercoaster. Perfect for the fans of Sophie Kinsella and Jane Costello.

Frankie Green’s happy ever after is put on hold when her childhood sweetheart husband complains things are boring in bed.

When he asks for some space, she sets out to win him back by getting herself a sex education.

Little does she know that her hilarious, tender and embarrassing journey of enlightenment is going to change everything…

A story full of humour, heartache and happiness, of friendship, coming of age and overcoming insecurity.

„The Late Blossoming of Frankie Green” is Laura Kemp’s third release, and the second book by this author that I’ve read. Actually, as soon as I’ve heard about this book, seen the cover and read the synopsis I knew that I need to read it – it sounds so daring, unique and different, and provocative as well, and when I spotted that the title is available on NetGalley, I quickly clicked „request” and waited, hoping to be approved.

The story started in a brilliant, funny way and I so hoped it’s going to continue like this, but unfortunately soon, very soon, as in the first chapters, it changed the tone a little and went on like this. And by „like this” I mean that the author has concentrated on the smallest details, such like describing how each of the characters looked like, mentioning the last freckle on their noses, for example, and also the story, instead of gaining speed, was held on a very steady level. I also thought that the book is going to follow Frankie and Frankie only, so it came as a little surprise that it also concentrates on Frankie’s friends, Em and Letty. I don’t mean it was bad or that it didn’t suit the story, it just surprised me as the blurb mentions only Frankie.

Our Frankie. She’s your normal woman, a neighbour, a girl who loves her husband to bits. She thinks that everything runs smoothly in her marriage. That is, until one day she’s surprised by her husband Jason expressing some sexual desires and stating that Frankie is not at all experienced in bed, and that he needs more excitement, and that he needs a break. Because Frankie is not experienced in bed, let me repeat this. And also because their life is very predictable – shortly, he needs to see if there are other options, to explore the world a little. But mostly because of a once in a week sex in a missionary position only. Oh guys, to say that Frankie didn’t see it coming would be an understatement! It hurt ME to see how shocked she was, how she didn’t expect it, how she was sure that their quiet life is this what they both need. But well, if Jason really means it… Frankie doesn’t transform into a vamp or nymphomaniac on the spot, oh no, but she decides on a very courageous step and takes a sex – teacher. She’s desperate to get Jason back – well, yes, she is afraid to come out of her shell – but she’s determined and won’t hesitate to change. I must say, I liked Frankie, and I admired to what extent she’s willing to go only to get her husband back. If he’s worth it? Well, this is the other thing. If she’ll get him back at all? This you must read for yourself.
And so our Frankie embarks on a sexual journey, and the list of things she wanted to learn differentiate between spanking, role playing, erotica and some other interesting things, and when she and her teacher eventually got to their lesson, it was both hilarious and touching, and it felt so genuine when the author wrote about their feelings at those moments, and she also brilliantly captured how difficult it was for both of them.

Frankie’s best friends are Em and Letty, and their stories are also very significant for the book. Those two have their own demons to overcome, their lives have thrown a curveball or two at them and they have their own challenges. In their own ways those two women also found themselves afresh, they developed and blossomed and found what it is that they want to do and how they want to do it. The story is told from the three friends’ points of view and we are taken on a journey where we learn about the women’s lives and everything they are doing. There is lots happening in all of their lives, However, in comparison to Frankie’s story, their stories felt a little too bland and too clichéd for my liking and I had a feeling that after delivering the climax in every single one of the three stories, the plot then came to a stop and there weren’t any big surprises for us.

As much as the three women are the main characters in the story, it was Floyd, Em’s brother and Frankie’s sex – teacher who easily enchanted me. He was funny, down – to – earth, easy – going and you could see he feels comfortable in his own skin, and of course him volunteering to be Frankie’s sex – teacher had a hidden agenda, which I, personally, found incredibly sweet.

This story in a lovely way shows how the main character slowly but steadily started to come out of her shell and comfort zones, and I don’t only mean her sex – life here. It was great to see how she grows in confidence and how she realises what she really wants from life. I loved to see how Frankie starts to see herself, how she starts to appreciate herself and love the person that she is, and not the person that her husband Jason wanted her to be. Also, the other characters were neatly formed, and they also changed throughout the story, which made me rooting for them.

It’s a bit flirty, sexy, different and open and written in a very fluent way. While the two sub – plots about Frankie’s friends are a little predictable, Frankie’s story is unique, quirky and absorbing and on the whole I really enjoyed it. Frankie was really broadening her horizons and I liked how the author described her journey, with all her emotions, dilemmas, feelings – because it was not so easy for Frankie to open herself, as I can easily guess, and even though the idea of having a sex – tutor didn’t come easily to her, she nevertheless took the bull by the horns, to overcome her reservations. So if you are looking for a book with interesting, unusual plot, well – developed characters and about discovering yourself, look no further and try „The Late Blossoming of Frankie Green” by Laura Kemp.