Bridesmaids: The One with the Engagement Party 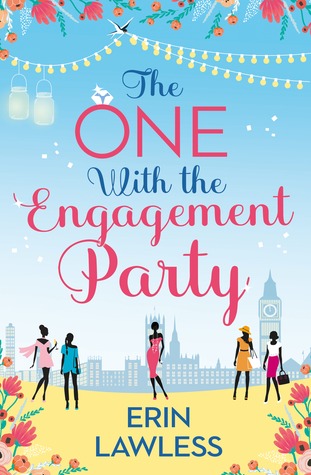 For fans of romantic comedies like Bridesmaids and Four Weddings & a Funeral, and bestselling authors Mhairi McFarlane and Jenny Oliver, this is a hilarious new romantic comedy series of four novellas about one bride and her four best friends.

Nora Dervan is getting married… but her four bridesmaids are more full of secrets than champagne.

Bea has barely gotten past the fact that her two best friends are seeing each other, and now they’re engaged, and Cleo is rather distracted by the hot new colleague she absolutely, definitely must not sleep with. Daisy is dreading the singles’ table, whilst Sarah’s own marriage hasn’t turned out to be all she hoped it would be…

„The One with the Engagement Party” is the first in Erin Lawless’s new four – parts „Bridesmaids” series. Here we are introduced to Nora, who’s just got engaged to her best friend Harry and asks her friends Bea, Cleo, Daisy and Sarah to be her bridesmaids. It is more of an introduction to the whole series, I think, as it is full of hints about other characters and their lives. However, with this many points of view, characters and events, the stories can take any direction and I am really curious what’s going to happen next and with whom. Actually, I think that with all those secrets, with these couples, the wedding party, some secretly in love with others and some developing drama, it would make a perfect TV series.

My problem was that I couldn’t connect with the characters and I think it’s because there were many of them and this, being a novella, with the limited number of pages resulted in the fact that the author just couldn’t give them all as much depth as I’d like her to, and in the end I didn’t know who is who and why and what they have to do with each other. I just feel that I wasn’t given a chance to get to know them enough to like or dislike them.

What I absolutely enjoyed is that some of the chapters are preceded by wedding stories, real wedding stories, and they were brilliantly funny and I’d love to see more of them. It was a great addition. And Erin Lawless’s writing style is really great and easy to follow, it’s modern and sophisticated and I enjoyed her story – telling.

The continuous switches between the characters were troublesome for me because really, when I already got used to the person on the scenes, the POV changed to another character and I had problems telling them apart. Also, I was struggling to find a content in this short story to be honest and I had a feeling that except of Nora and Harry getting engaged and organizing the bridal party there is nothing more happening. I missed some depth to this story but I hope that it’s going to come with the next instalments.