Guys. I am absolutely thrilled to be a part of Alex Brown‚s blog tour for her brilliant, fantastic, heart – warming (yes. You guessed that I’ve rated the book with 5 stars) new novel „The Secret of Orchard Cottage„. Below you can read my (gushing! You are warned!) review, but also I have Winnie’s favourite recipe for you (and Winnie is a very, very important character in the book!)! But be sure to check all the other blog tour stops, for more content, more recipes and fantastic extracts!

The Secret of Orchard Cottage 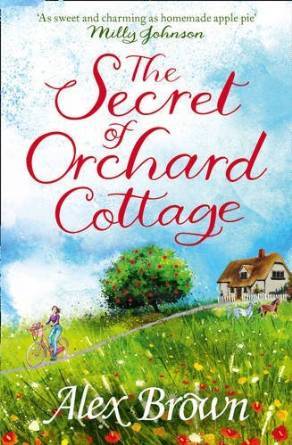 Discover the wonderfully warm and heartfelt new novel from Alex Brown, bestselling author of The Great Christmas Knit Off.

April Wilson is wondering what to do next – her life has been turned upside down after the loss of her husband so she’s hoping to piece herself together again with a visit to her elderly great aunt, Edith. Arriving in the rural idyll of Tindledale, she’s dismayed to find Edith’s cottage and the orchards surrounding it in a sorry state of disrepair. Edith seems to have lost interest completely, instead she’s become desperate to find out what happened to her sister, Winnie, who disappeared during WWII.

April gets to work immediately, discovering that the orchard still delivers a bumper crop each year, and with the help of some of the villagers – including Matt, the enigmatic Farrier – begins to unravel the mystery of the missing Winnie. Slowly,
April can feel things coming to life again – but can Orchard Cottage work its magic on her too?

It is already some time since I’ve last read Alex Brown’s book but after reading only the first few sentences of „The Secret of Orchard Cottage” I’ve immediately felt like at home! There is something magic in Alex’s writing style and the way she tells her stories that just appeals to me and I could read her books over and over again. And right now it is really hard to put into words what I want to say about this book – it was an exceptionally warm, poignant and at the same time funny and uplifting story and there were moments that made me smile so much, and there were moments that made me shed a tear or two – just the perfect mix. There is a lot of depth in this story that makes it even more richer and welcoming, and it is beautifully written. And, you know, I’ve never knitted before, not once in my life, but I am certain that if I went to Tindledale, I’d start knitting

In „The Secret of Orchard Cottage” we have April that has lost her husband to a motor neurone disease. He’s left her with her two grown – up stepchildren, and them having their own lives makes April feel even more alone and lonely. She decides to revisit Tindledale, where she has spent her childhood and where she’s made the loveliest memories, and where her Great Aunt Edith is still living in the old Orchard Cottage. But April is not prepared to see the changes in the long – time – no – see aunt and cottage, as they both grew very old, changed and both deteriorate. April steps in and starts to organize the things to sort out the house, Edie and – even if she doesn’t know about it yet – herself as well. With the help of some new – and also old – friends April faces all the challenges that await her in Tindledale and which include thatched roofs, two neglected horses, very long grass, one fire, cider making and, of course, knitting!
What I adored is how cleverly the author weaved the subplot of Winnie, Edith’s sister, into the story. It is a kind of mystery mentioned occasionally and that kicks off more seriously deep into the book. It’s sad, and when the scene where April was finally able to tell her Aunt about Winnie arrived, I had a lump in my throat. Moreover, even though I was guessing that the truth can’t be as straightforward as some of the Tindledale villagers think, the discovery has taken me completely by surprise.

The characters in this book are so very well written! They are vivid and genuine and I had a feeling that any moment now they’re going to jump off the pages. There is something in April that make you like her immediately, I think you can’t NOT to like her and you wish her only the best. She’s genuine in her feelings, she doesn’t hide the fact that she’s still missing her husband and that it’s not easy for her. She wants to make everybody happy, and especially her aunt Edie. Throughout the story we can accompany April on her journey and see how she’s changing, blossoming, together with the Orchard Cottage – it was as if those two needed a breath of fresh air.
Among the people that April meets in Tindledale are Matt, a single dad to Bella. Bella immediately grew on me, and her desperation was described with so much feeling and there couldn’t happen anything better for her than meeting April.

Alex Brown with so much heart and feeling writes about all the characters and places and brings them so easily and effortlessly to life. I’d love to visit Tindledale, have a drink in the Duck and Puddle or a cake in Spotted Pig Tearoom. The descriptions of Orchard Cottage and its surroundings were beautiful, and I could easily imagine all the views and smell the scents. They were all so true to life, and I had a feeling that I can only reach out with my hand to pluck an apple from a tree. The plot this time covers some much more serious issues, such as dementia or bullying, but in a very sensitive, gentle way and together with all the other events it just makes a perfect story that just struck a chord with me.

There was so much warmth in this story, this overwhelming feel – good factor and I really didn’t want this book to end. Alex Brown has in a brilliant way added some twists and turns but what I adored most was the fact that yes, we had some surprises on the way, but those surprises were not too exaggerated, and even with the problems and some obstacles and issues to figure out the story stayed down – to – earth and felt realistic and genuine. But even with it being realistic and down to earth, there is a sparkle in this novel, there is this „something” that makes it exceptional and gorgeous read. „The Secret of Orchard Cottage” is set in Tindeldale and, next to new characters, features also some of the good, old friends from previous books, I had a feeling that it is a little more serious in tone and style, that it not only concentrates on the brighter side of life but also on things that are more serious and poignant, which adds much more depth to this story. There are many layers, but it doesn’t mean the plot is confusing, no, it’s crystal clear, and the layers intertwine in the most brilliant way. This book just feels so special, and when you read it, you’ll understand what I’m talking about

I think that each and every new book by Alex Brown is better than the last one and soon I won’t have any more stars to rate, as right now I’d give this book 10 out of 5. She’s maturing and growing as an author and you can see it in her writing and her characters. This book has awoke all kind of emotions in me, I laughed, I smiled, I cried, and there is everything I’m looking for in a book and even more. This story has a perfect pace, great setting and characters that grow on you – what would you like more? Highly recommended.

From The Secret of Orchard Cottage by Alex Brown

For the cinnamon crumble topping

AND HERE YOU CAN FIND THE OTHER STOPS OF THE BLOG TOUR!