A Summer of Secrets 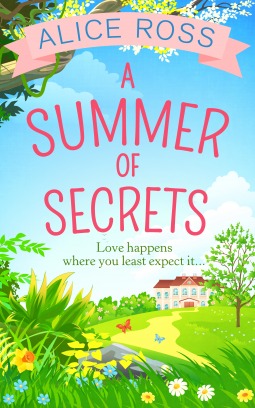 Source:  Copy provided by the publisher via NetGalley,  thank you!

Portia is determined to restore Buttersley Manor, her family’s crumbling ancestral home, to its former glory. Yet she has a feeling that there are a few forgotten skeletons in the dust-covered cupboards.

Jenny has put her life on hold for far too long. It’s time to finally start living and to dig up those hopes and dreams she’s kept hidden all these years – but is she brave enough?

Rich is happily married with a beautiful wife and lovely daughter. In fact, his world is perfect until a very unexpected consequence of his past walks through the door…

Joe would like nothing more than to travel back in time to when he and Gina were happy. But is it too late to rescue what they once had?

One thing’s for sure, nothing’s ever quite what it seems when it comes to life in the country!

„A Summer of Secrets” is the second book in the Countryside Dreams series by Alice Ross and as I haven’t read the first book I was a little afraid that I may miss something. However, it can be absolutely read as a stand – alone novel and I also had a feeling that the book introduces totally new characters to us, so no problems here, guys.

The story introduces us to four different characters and this is my problem here. You know how much I like when something links the characters to each other, when their stories somehow intertwine, and here it only looked as if the place they were living in, small town of Buttersley, is the only thing that links them. Otherwise they didn’t have anything in common and I am not sure if they all even knew each other. Organizing stories this way is often really confusing for me because I am always looking forward to something happening to all of the characters, to something they have in common, and usually I end the book surprised that it ended already and what now?
So we have Portia here, who’s back to the town, having inherited her parents’ home, but she’s not sure what to do with the estate. she’s given up a job as a war correspondent and her dream now is to keep the house and make something special there. Rick, a successful entrepreneur with a lovely family consisting of clever, beautiful wife and young daughter, but suddenly his life is being turned upside down – is his marriage going to survive this shock? Jenny, already over 50, but still living with her dominating mother and letting her to organize her life. But suddenly Jenny starts to discover that there is much more to life than being under her mother’s thumb. Joe, still coming to terms with the fact that his girlfriend has broken up with him and left him, taking their baby son, but now suddenly Gina is back… For good? Or for worse?
So you see. Four people, four different stories, nothing linking them to each other. Nevertheless, I really liked the characters – they were full of life and the way they acted and reacted was realistic and seemed genuine. I can’t say that I had my favourite character, to be honest, they were all really well developed and their stories were told in a great, very accessible way, though I think that it was Jenny that stole my heart. At first I was surprised when I’ve learnt that she’s over 50 already, but when I got to know her story I really, truly fell for her, and the more I was reading about her, the more I liked her and kept my fingers crossed for her. Even though she’s been living under her mother’s thumb, she was a clever, funny woman with just the right dose of sarcasm and distance to herself and I loved the scenes with her and her rescue dog – they were absolutely great! But really, all the other characters were also brilliant, and I think it was impossible not to like them – they were fair and down – to – earth, just like I like my characters to be. Also the twists and turns that they were meeting as the story progressed were unexpected and while some of them were for my liking too far – fetched, mostly the reader could relate to them. Alice Ross has managed to write them in a way that made me feel as if I know all of them and am part of the Buttersley community.

The story is full of really funny moments but it also touches upon some serious situations and I loved how well the author has balanced them in this story. The things that happened to the characters could happen to all of us and I liked how they carried off with all the problems and ups and downs.

„A Summer of Secrets” is not a book that is going to stay with you forever but nevertheless, I enjoyed the story while reading it. It is fast – paced, have some surprises on the way and mostly the characters are really well developed, even those that are only the background to our main ones. The switching between the characters was very well done and I immediately knew who is who and who belongs to who. It is really a brilliant summer read, full of love, hope and also happily ever after – and who doesn’t like their HEA, right?

Alice Ross used to work in the financial services industry where she wrote riveting, enthralling brochures about pensions and ISAs that everyone read avidly and no one ever put straight into the bin.

One day, when nobody was looking, she managed to escape. Dragging her personal chef (aka her husband) along with her, she headed to Spain, where she began writing witty, sexy, romps designed to amuse slightly more than pension brochures.

Missing Blighty (including the weather – but don’t tell anyone), she returned five years later and now works part-time in the tourism industry.

When not writing, she can be found scratching out a tune on her violin, walking her dog in wellies two sizes too big (don’t ask!), or standing on her head in a yoga pose.