Today I am absolutely thrilled to be kincking off blog tour for Tracy Rees’s second novel „Florence Grace„. I totally LOVED Tracy’s debut novel „Amy Snow” so I was really looking forward to her new release – Ms Rees is slowly but steadily climbing to the very top of the list of my favourite authors and she can write historical fiction in an enchanting way. So sit bequem, read my review, then pre – order the book (which is out this Thursday) and thank me later for recommendation! 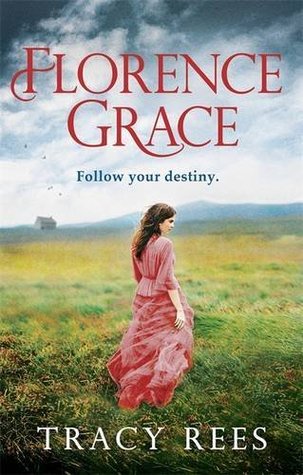 Source:  Copy provided by the publisher,  thank you!

Florrie Buckley is an orphan, living on the wind-blasted moors of Cornwall. It’s a hard existence but Florrie is content; she runs wild in the mysterious landscape. She thinks her destiny is set in stone.

But when Florrie is fourteen, she inherits a never-imagined secret. She is related to a wealthy and notorious London family, the Graces. Overnight, Florrie’s life changes and she moves from country to city, from poverty to wealth.

Cut off from everyone she has ever known, Florrie struggles to learn the rules of this strange new world. And then she must try to fathom her destructive pull towards the enigmatic and troubled Turlington Grace, a man with many dark secrets of his own.

„Florence Grace” is Tracy Rees’s second novel. Last year I read her debut „Amy Snow” ( I can see a pattern coming here!) and I was totally delighted with this book, and I was so looking forward to the new release. It is always exciting to see how the author manage with the success of the first book and how is the „dreaded” second novel, but no worries here, and even though I think that „Amy Snow” is as yet going to stay the author’s biggest success and my favourite of hers, „Florence Grace” is also a piece of a brilliant historical fiction.

„Florence Grace” is set in the beautiful Cornwall and London of Victorian England and the author really brings the times to life, with descriptions of the places, harsh landscapes, difficult times, clothes and lives of the characters – she has incredible, evocative way with words and everything she writes about is vivid and feels like jumping out of the pages at any moment.
There are many characters in this novel, and the author introduces us to new ones throughout the story but as there is a bunch of the main characters it doesn’t feel confusing – I didn’t feel confused to know who is who, even if the names were mentioned after some time of absence. As in the first book, also here the main character, Florence, is a strong and very spirited young girl. She’s intelligent, clever and she knows what she wants. She doesn’t care about appearances, which is mostly very clear when she’s in London, but she also realises that to survive she must fall into line. There is also a touch of magic to her – she sees flashes of the future and she can sense people, but it doesn’t overwhelm her personality and descriptions of her. It felt as if she is a step ahead of all the other people, as if she knows much more than people of the times. Brave, with open heart, I really enjoyed how she settled in to a new life, even though the people – her long – lost family – that were supposed to help her were not so keen on this and were not so tolerant of the differences.
In fact, all the other characters were really brilliantly drawn and it didn’t take long for me to start to love or hate them. The author took her time to introduce them to us and I really felt as if I know them all inside out, and I really liked it. There was a depth to them all and all of them had their own complicated personalities and had their own stories and I really appreciate that Tracy Rees hasn’t made their lives too easy – they had problems, they made mistakes, they acted and reacted like real people, and all in a way that was so absolutely suitable to the Victorian times.

Tracy Rees has also in a great way captured the differences between the wild, wild moors and the hard and harsh life there, with men working in the mines and women trying to nourish their families, and London, where life at first could seem so much easier and for sure more glamorous, but wasn’t it in fact much more difficult than in Cornwall? With all the lies, secrets and keeping appearances? And Florence has seen it immediately, she didn’t need any special gift to see this, and as much as she hated to live in lie she’s also seen the need to conform. But she’s never stopped dreaming about coming back to her roots.

The book started very promising and interesting though there were passages that dragged a bit, but after Florrie found herself in London it went a little downhill. There was one moment that made me laugh out loud when Florrie and her cousin went for an argument but other than that it was kept on a very steady level. I’m not saying the pace was not right because it was, I just had a feeling that we are going in circles about the same things and it spoiled the reading a little for me.

I truly admired the writing style. It is historical fiction, but written in a very accessible, not too pompous way, and I loved when Florence unconsciously switched into her Cornish accent. There are many twists and turns in the story – they must be when you take length of this book into consideration! – though nothing so very life – changing or too dramatic, which is a good thing, as the story flows really smoothly and it keeps the air of realism and possibility – it just sounds genuine. I only have some problems with the ending, which sounded… I don’t know, a little weird? Different? Not suitable for this story? I’m not sure, I can’t keep my finger on the thing, but it just didn’t sit with me and I’m afraid it can confuse some readers. But altogether, I really enjoyed „Florence Grace”. It was not as brilliant as the previous book but Tracy Rees kept to her standards and delivered a wonderful, detailed, very well thought through book. There was lots and more in this story. The author is a great story – teller and in Florrie she created a brilliant narrator. We have challenges in this novel, changes with all their ups and downs, searching for your own true self, following dreams, friends and foes, love and hate, hope and despair, wealth and poverty, truth and lies and staying true. Tracy Rees is growing in strength and she has found her own, lovely and distinctive voice and she is for sure the one to watch – I am already waiting for her third book.