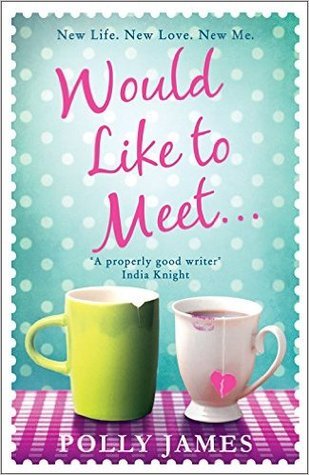 Source:  Copy provided by the publisher,  thank you!

A hilarious, heart-warming read perfect for fans of Shirley Valentine and You’ve Got Mail.

Could the worst thing that’s ever happened to Hannah Pinkman also turn out to be one of the best?

She and her husband Dan have reached the end of the line. Bored with the same gripes, the same old arguments – in fact, bored with everything – they split up after a trivial row turns into something much more serious.

Now Hannah has to make a new life for herself, but that’s not easy. She’s been so busy being a wife and mum that she’s let all her other interests slip away, along with her friends. And when Hannah is persuaded to join a dating site, her ‘best match’ is the very last person she expects it to be . . .

A clever, funny and poignant novel about life after a long relationship, the importance of friendship, and rediscovering your identity.

I’ve actually read „Would Like to Meet…” some time ago after receiving my ARC copy, having mixed the publication dates, but even though I haven’t written my review then I can still remember the highlights of the book – which is a great thing because it means that I truly bear it in my mind and that it’s not a book easily forgotten. It is also a second book by Polly James, and second that I had a pleasure to read and I can say that the author doesn’t fear to write about things that are not so obvious, that are painful, about our everyday problems but in a very entertaining, down – to – earth way.

There is a great mix of characters in the book and you can choose between funny, nice, hilarious, unlikeable and all of them are going to surprise you. Hannah is a great character, so well written and rounded and it was a real joy to follow her on her journey to find happiness again. I loved her down – to – earthnesness and that she maintained a healthy distance to herself, not taking herself too seriously. She had moments of breakdown which only made her feel so much more realistic, because who wouldn’t have a breakdown when in her shoes? The things she goes through are sometimes heart – breakingly sad and sometimes laugh – out – loud funny but always realistic and there were moments that I found myself cringing with embarrassment, saying „Oh God” and rolling my eyes but mostly I just wanted that everything went great for Hannah.
There was one character that bothered me a lot and it was Esther, Hannah’s friend from work. I think I looked through Esther right at the very beginning and it frustrated me that Hannah hasn’t seen what kind of person Esther is. This was this typical kind of toxic relationship and as much as it annoyed me that Hannah sticks with Esther, I also could understand and see the mechanisms that pulled her back from finishing this relationship and why she always tried to engage Esther in her activities. However, Esther, a very big no – go from me.

But my most anticipated part of the book was when Hannah eventually agreed to join a couple of online dating sites! You know how much I loved stories about dates, blind dates, online dating etc, no idea why to be honest, I just love them, and each time I can’t wait to see on which levels of hilarity the author is going to take us with. And even though Polly James has organized neither an earthquake nor revolution when it comes to online dating, some of Hannah’s experiences were hilarious and impossible to describe – just let me tell you that I wasn’t disappointed! Hannah was sometimes speechless at what she discovered at the websites, and I was speechless with her…

I am not a specialist in splitting up (hallelujah!!!) but I think that even though some of the reviewers are moderate about the way it happened in the book, I think that this is the way it happens – the emotions and feelings rally for a long time and then what we need is a knickknack, a bagatelle, a detail for them to explode and here we are, splitting over a reality TV program.

Altogether „Would Like to Meet…” is a light, funny and entertaining story with a great depth to it. At first it will make you think about marriages and that not everything may be as we think it is, and then it’ll have you in stitches/horrified/entertained while introducing you to the world of modern dating, and actually how dating looks like after many years you used to do this. Polly James just hits the most important spots and writes how it really is, without beating around the bush, but also without any patronising moments, in a very accessible way. The book is written in a easy and light way and I quickly found myself totally immersed in Hannah’s life. It is a thoughtful and warm read, full of characters that it is easy to connect with, even if they annoy you every once in a while, so true to life and I really enjoyed it.