Today I am kicking off Colette Dartford‚s blog tour for her debut novel „Learning to Speak American„. This book is  based on Colette’s experience of renovating a derelict house in California’s Napa Valley. Having bought and renovated the house, Colette lived there with her husband for many years before moving back to the UK, and the parts about renovating the house were really brilliant! The novel was a quarterfinalist in Amazon’s first novel award in California. Colette’s second novel, The Sinners, will be published by Bonnier in 2017, which is a great news guys! 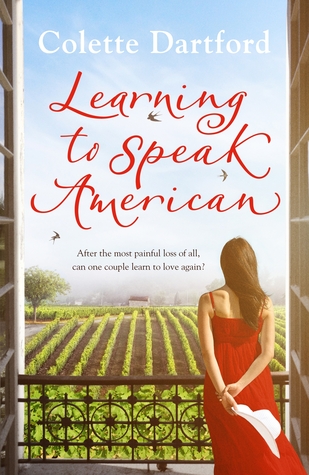 „Having suffered in silence since the tragic death of their young daughter, Lola and Duncan Drummond’s last chance to rediscover their love for one another lies in an anniversary holiday to the gorgeous Napa Valley.

Unable to talk about what happened, Duncan reaches out to his wife the only way he knows how – he buys her a derelict house, the restoration of which might just restore their relationship.

Colette Dartford’s debut novel, Learning to Speak American, exploring whether a parent can ever truly move on from the death of a child. And, after all the heartbreak, whether Lola and Duncan can learn to love again.”

I’ve heard many praises about Colette Dartford’s debut novel „Learning to Speak American” and I truly wanted to read the book for myself, so when the opportunity for taking a part in the blog tour came, I didn’t hesitate and jumped at the chance. I really liked the sound of the book as well and I was asking myself all the time, can such a tragedy bring people together or rather drive them away? This is the question that was really bothering me all the time, maybe because I know people who are experiencing the same situation and it doesn’t seem to work for them, so I was really intrigued to see how it is going to continue between Lola and Duncan. On the surface they both seem to cope with the death of their daughter, or should I rather write „cope” because I think it is a situation that you can never process, and I wanted to see for myself the outcome of this story.

I think that for a debut the author has chosen a really difficult subject matter to deal with, and hats off to her for starting with such ambitious novel. The book started in a very promising way and I could feel all the feelings and emotions of the characters myself, as they were really written in very descriptive way and I could feel the tension, the uncertainty, this wall between Duncan and Lola. However, soon the story went a little downhill for me, I found it hard to get into it – I can’t tell you why exactly, it’s just that all the feelings started to overwhelm me. I also think that the death of Clarissa should have been explained much quicker – we know that Lola and Duncan had a daughter and that she’s dead, and this subject came every once in a while in the story, but the real reason of her death was kept a secret. There were some flashbacks, some hints but we needed to wait almost to the end of the book for it to be explained, and I think it was unnecessary tension as it led us to thinking that there was some kind of mystery, especially as Duncan made it clear more than once that he feels guilty about it. I think it should have been told straight at the beginning because maybe then it would change my view of the characters? Because I also couldn’t connect with the characters and as much as I understand that after such a tragedy you must find something to keep you occupied, I couldn’t stomach Duncan and his escapes into work and other „hobbies” (I didn’t like Duncan. I just didn’t. He was a coward, he was cold and he was unjust. I understand his grief, I truly do, but he should have open to Lola and stop carrying the weight of the whole world on his shoulder – because he felt like this. Though there were moments that even with me disliking him, my heart really went to him, he was so incredibly sad and he lived with this sadness alone) and Lola being obsessed with the house renovations.

I much more enjoyed the parts of the book set in Napa Valley than the parts in the Somerset village, as they were so full of sadness, secrets and lies and they made me feel really depressed. And the characters that I liked most were probably Lola’s new neighbours. I empathised with Lola but somehow, the way she acted and reacted, she didn’t feel so genuine to me – I can’t put my finger on my problem and it annoys me to be honest, because there seemed everything to be okay with Lola and yet I had problems to warm to her. To be honest both the characters, Lola and Cain McCann felt just too bland to write a whole story around them and I think I missed a little more depth to them.

The book is written in a lovely writing style, however the pace was too slow for my liking and I was mostly waiting for something to happen. But it was a deeply emotional novel about grief, about second chances and new beginnings and I was intrigued by Lola and Duncan’s story and wondered how it’s going to end. Although the end was far too Disney – like in my opinion and it didn’t make me feel so content and glad. I liked how the story was told from Lola and Duncan’s perspectives, alternatively, as it gave us a deeper insight into their heads, into their thoughts and we were fully aware of what they were thinking and feeling. And the secrets they were keeping from each other as well, and there was quite a number of them. And what the author managed to do is write a novel that is sad on one hand, and on the other filled with hope – she did it really professionally and perfectly blended those two feelings. She has also with a lot of subtlety captured the works of a broken relationship. Yes, I am a little torn about „Learning to Speak American” but altogether it was a nice book and I will be looking forward to reading more from Colette Dartford.