The Bookshop on Rosemary Lane 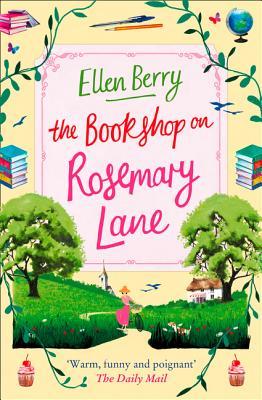 **Take a trip to the Yorkshire village of Burley Bridge, where a very special little cookbook shop is about to open its doors…**

Kitty Cartwright has always solved her problems in the kitchen. Her cookbooks are her life, and there isn’t an issue that ‘Cooking with Aspic’ can’t fix. Her only wish is that she had a book entitled ‘Rustling Up Dinner When Your Husband Has Left You’.

On Rosemary Lane, Della Cartwright plans to open a very special little bookshop. Not knowing what to do with the hundreds of cookbooks her mother left her, she now wants to share their recipes with the world – and no amount of aspic will stand in her way.

But with her family convinced it’s a hare-brained scheme, Della starts to wonder if she’s made a terrible decision. One thing’s for sure: she’s about to find out…

Lose yourself in Della’s world of food, family and friends. The perfect read for fans of Trisha Ashley and Carole Matthews.

Novels with the word “Booskhop” in their titles are trending guys, trending, and it is lovely, because can there be a greater setting to a book then a bookshop? That is, if the above mentioned bookshop appears in the story at all! Ellen Berry, or rather as we know her better, Fiona Gibson, has decided to locate her latest release in a bookshop as well. In fact, this book is the first in the planned for three novels series, and it is a very promising beginning. I hope that the next books are going to introduce us to new characters – I’d hate to see that Della’s business failed.

However, I had a feeling that nothing actually happens in this book, especially about the above mentioned bookshop. I was hoping for so much more about the shop itself but it actually appears only a few times in the story, when Della wonders if to open or not to open, and it’s opening is at the end of the story, so we really don’t know if she’s succeeded or not. I was also incredibly intrigued by the idea of a cook – books shop only (because Della has inherited hundreds of her mother’s cookbooks. Hundreds. Like, almost thousand!) and I was desperate to know how it turned out – unfortunately, I was not to know it. The story instead concentrates on the problems between Della and her husband Mark. It just seemed to take forever for the story to eventually mention the shop but in the end it was as if it was a very secondary subplot, an afterthought and I just found it a little misleading and I felt a little deceived. It is just that you are waiting and waiting for something and it doesn’t come and when it eventually appears you are so annoyed and disappointed.

As much as I liked Della – because I think she was worth liking, yes, she was naive but she was also good – natured and she wanted only good – I hated how short – sighted she was when it came to Mark. He was so distant and moody and behaved in such an obvious way but I think Della wouldn’t see the truth if it came and slapped her on the face. What I liked so much in Della was the fact that she allowed herself to have dreams, and she also was so determined to make those dreams come true. She wasn’t afraid to take risks to follow her heart and I applauded her loud on this, heck, I was giving her standing ovations! Things often didn’t go as well as she’d like them to, and it also made her feel more down – to – earth and realistic, and in these moments yes, she felt depressed and dispirited but she kept going. I only had a feeling, and I didn’t like it at all, that Della is more like everybody’s servant. She looked at the world through rose – tinted spectacles and saw her marriage, business in the same light and it was a tad annoying. But Della’s daughter Sophie was truly a great character and I’d love to see more of her, though due to her leaving for University it wasn’t possible.

What I also liked is the fact that the characters were so normal and not at all perfect. Della’s life could be probably a carbon copy of so many lives of real people, as she was the one out of three siblings taking care of their mother when she was dying of cancer, yet there is almost no gratitude from them towards Della, on the contrary, her brother can only find faults in everything she did for their mother. The characters have the same problems and they were wrestling with them just like we must to. What bothered me however in all those situations was that Della never seemed to pick up a fight, to stand up for herself – I so wanted her to show all those patronizing people in her life that she’s worth as much as they are or even more.

So yes, the book was a nice, easy, light – hearted read but it didn’t deliver for me. It was about things that I didn’t expect, and not mentioning things that I’d love to see more. I had a feeling that the author stretches the events unnecessary. The story was also a tad too predictable, there were chapters that were much too clichéd and far – fetched for my liking. But it is written in a lovely, warm and inviting writing style and there are plenty of humorous moments but also the author proves that she can write more poignant scenes as well. I will be for sure reading the next story in the series, I am truly intrigued and I’d love to see if it continues the story about Della or is going to introduce us to a new set of characters.

One thought on “The Bookshop on Rosemary Lane by Ellen Berry”