Hi guys, and happy Tuesday! Today I have a new blog tour for you – one that I was so eager to take part in! It is for Tracy Buchanan‘s new exciting novel “No Turning Back” and believe me, this book is well worth reading! I’ve read it in almost one sitting, forgetting about cooking, going outside, about the whole world actually – it is such a hooking book that it’s going to leave you open – mouthed after turning the last page. Whatever you do, just drop it and treat yourself to it! 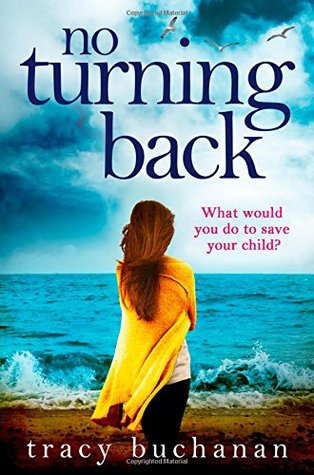 You’d kill to protect your child – wouldn’t you?

When radio presenter Anna Graves and her baby are attacked on the beach by a crazed teenager, Anna reacts instinctively to protect her daughter.

But her life falls apart when the schoolboy dies from his injuries. The police believe Anna’s story, until the autopsy results reveal something more sinister.

A frenzied media attack sends Anna into a spiral of self-doubt. Her precarious mental state is further threatened when she receives a chilling message from someone claiming to be the ‘Ophelia Killer’, responsible for a series of murders twenty years ago.

Is Anna as innocent as she claims? And is murder forgivable, if committed to save your child’s life…?

I am going to make a confession right at the beginning of this review. “No Turning Back” is Tracy Buchanan’s third novel and even though I have both of her previous books on my never – ending TBR pile, it is the first book that I’ve read. I’m ashamed, I truly am, especially as I’ve been hearing so many good things about this author and her writing – now, after reading this novel, I truly and fully understand this hype around Tracy Buchanan, it is so fully deserved! She is an exceptional writer and she has drawn me into her story immediately!
I read this book in two sittings in 24 hours – I just literally couldn’t put it down! Each page brought even more unexpected twists and turns and I couldn’t wait to see what’s going to happen. It had me hooked, glued to the pages and I raced through this story, that turned out to be so multi layered and complex. It is this kind of book that leaves you open – mouthed for a long time after finishing it.

The way this story is told is so chilling! It is mostly told by Anna, though I must admit that Anna herself is a very objective narrator and she doesn’t spare us the truth (albeit after it coming to light), but there are also some chapters told by the Ophelia Killer themselves – they gave me shrills, to be honest. The mix of the characters is great, and you have really a whole range of suspects to choose from! Their personalities were brilliantly captured and even if they were a background characters, they added tons of significance, depth and questions to the story.

And oh my word, I couldn’t believe how much bad luck is following Anna everywhere. I truly admired her, that she’s never given up – I probably would! I couldn’t stop thinking how much is going to come still and hit her on the head, how much is she going to take before she’ll fall and won’t get up? I also couldn’t believe how often Anna found herself at the wrong places at the wrong time – though, suffice it to say, she’s been living in a small town at the sea, so there weren’t many choices. A small town where the news spreads oh so quickly and sooner rather or later, after all the new scandals come to light, people start to turn their backs on her. In my eyes it was so unfair – and I liked Anna from the beginning and I thought she doesn’t deserve it. Although I am sure that all of the readers are going to eventually also start to ask themselves if this what Anna did was right and what would you do in such situation – I asked myself more than once. It seems impossible from where I am sitting now, on my comfortable couch, but what if? I’ve no idea. I am dead sure Anna didn’t intend to kill this boy but the circumstances and destiny decided something different and what I know is that I would never want to find myself in such situation. However, no matter what happened and what news came to light, I’ve never stopped to believe in Anna’s innocence – I had a feeling that someone is wrapping her in a web of lies and secrets, that someone is really trying to endanger her, to destroy her. Was I right? Was my gut feeling telling me the truth? Well, you must read for yourself 🙂

You know, somewhere around the page 100 I was absolutely certain that I know who is the assassin. I wanted to applaud myself on my smugness and cleverness, though a little later on I started to doubt in my own guesses of course, and I changed my mind a few times. However, when the revelation came, it was like somebody hit me in the face – never would I guess it. Never. I think I really went through every possible scenario and yet the ending came and laughed at me – it was a total surprise, a brilliant curveball, the last and most unexpected surprise for the readers.

“No Turning Back” is an absolute gem of a book. It was intense, the pace was quick, the twists and turns incredible and the tension built in a way that kept me on my tenterhooks, wanting more and more. The author brilliantly captured atmosphere of all the places and every time the characters entered the “worse” part of the town I myself felt scared about their safety. It was incredibly well plotted story with believable characters and events – sure, sometimes too clichéd, both characters and events, yet the author has managed to pull it off and create a thrilling, manipulating novel. I will be reading other Tracy Buchanan’s books as soon as possible and in the meantime I highly recommend “No Turning Back” to you!