Those Who Lie by Diane Jeffrey 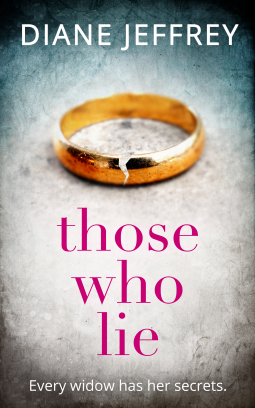 Source:  Received from the publisher via NetGalley in return for an honest review, thank you!

Emily Klein doesn’t know she has killed her husband until the day of his funeral.
At first, signs point to a tragic accident. Yet, as Emily pieces together the events before his death – events which led to her own memory loss – she begins to suspect that her husband’s death may have been the result of more than a terrible twist of fate…

But the accident is only the beginning. Because while Emily’s physical scars will heal, the trauma of the accident has awakened old ghosts. She hears strange sounds, catches things that can’t possibly be there in the corner of her eye. Before long, everywhere she looks, she seems to see her husband.

And suddenly, Emily finds herself asking the most dangerous question of all.

Can she really trust herself?

At the moment books described as mystery thrillers seem to be very trendy, and I was really lucky as most of those novels that I’ve read turned out to be really brilliant. Only lately I’ve read two or three books with similar pattern as this one and the tension in them was incredible, so being on a good roll I requested “Those Who Lie” on NetGalley, as it seemed to ideally place itself in this trend and the very lapidary synopsis sounded more than intriguing, implicating murder, manipulations and not knowing whom to trust. Brilliant, right?

However, guys, this book. When I reached the “10% read” symbol I knew who the culprit is and the further I read, the more I was sure that I am right. There were all the hints and signs and it was impossible not to know that this is this person. Sure, I was hoping that perhaps there is the hugest twist coming our way that is going to change everything but eventually there came a moment that I knew it’s not going to happen. So the end was absolutely not a surprise to me – sadly. Maybe I should be happy instead that my detective skills have gone public this time, hmmm? But no, rather not, I want the book to keep me hooked, I want to feel the tension and I want all the things in my brain to work. I also can’t not to compare “Those Who Lie” to the previous books with a similar outcome that I’ve read this year already, and in comparison this book seems too amateurish, full of clichés and situations that were absolutely predictable and made the read much too flat. Also, I couldn’t come to terms with writing style and the way the story was told, I mostly had a feeling I am reading a children’s book where everything must be explained: firstly they did this, then they went there and after that Emily had a shower. Sometimes it also felt too chopped, the changes in situations and perspective were too sudden and I had a feeling that I’ve missed something. I might be spoiled be the previous books but really the scenes and situations didn’t carry an earmark of danger for me and one of the last scenes, including knife, it… well, it made me roll my eyes. I also had some problems with the male characters – to be honest till the very end I wasn’t sure who is who and to whom they belong and what is/was their role – maybe except for Matt.

There is a dual timeline in the story, jumping between Emily’s childhood and the present. The chapters set in 1995 are crucial in revealing Emily’s past and are explanation for her mental state, as she suffers not only from depression now but also personality disorder – though, to be honest, I didn’t spot it and was all the time thinking if it is something that THE character wanted her to think she has? The novel is told in the third person, in Emily’s point of view so that means that we get to know her mostly and we know her thoughts although I am really not sure if the first person narration wouldn’t be better here. Maybe it would add more tension to the whole story and maybe it would made me connect with the characters, as it didn’t happen?

As with this genre, the characters weren’t there for us to like them. They were portrayed with all their flaws, they were not perfect and they made mistakes. They all had secrets and they lied to each other, and eventually Emily started to see that she can’t trust them. But is Emily really the innocent one? What with her tendency to depression? The author touches upon many gentle and tricky issues and I must admit that the scenes at the beginning made me feel shock – deep, profound shock and I was shocked at the detailed way Diane Jeffrey went into the awful details. She also goes into relationship between daughter and alcoholic mother who turns a blind eye at what is happening.

It could be a great psychological thriller, and maybe it is, but not for me – sadly. It is not that I’ve read too many similar books, because when they’re good I can read thousands of them and they will never be boring. It is just that I guessed who and what happened and it turned out that I am right. However, I of course appreciate how the author tried to put the wool over our eyes, how she tried to complicate the things and draw us into the tangled web of lies and secrets. It’s just that for me it all sounded too implausible, as if the author herself wasn’t sure if she’s able to pull it off. It just didn’t convince me, the playing with Emily’s brain is poorly done in my opinion. But if you’re looking for a story about stalking, manipulating, mind games give this book a go – you may find it hooking.