Hi guys, hope you are all having a great Saturday. Today I am really thrilled to be hosting Jenny Ashcroft’s blog tour for her debut novel “Beneath a Burning Sky”. What can I say guys? This book was absolutely brilliant, I haven’t expected it to be SO good and I am incredibly glad to have discovered a new author – already looking towards Ms Ashcroft’s next release!

Beneath a Burning Sky by Jenny Ashcroft 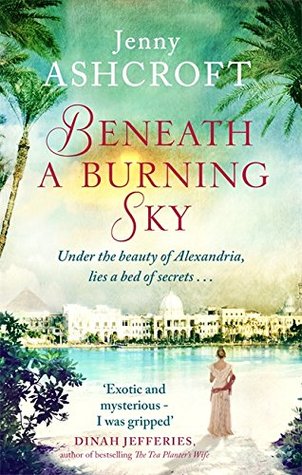 ‘Exotic and mysterious – I was gripped by this complex tale’
Dinah Jefferies, author of number one bestselling The Tea Planter’s Wife

A beautiful and heart-wrenching story of love and betrayal, set against a backdrop of British-occupied Egypt. Perfect for fans of Victoria Hislop, Dinah Jefferies and Leah Fleming.

When 22-year-old Olivia is coerced into marriage by the cruel Alistair Sheldon, she leaves England for Egypt, his home and the land of her own childhood. Reluctant as she is to go with Alistair, it’s in her new home that she finds happiness in surprising places: she is reunited with her long-estranged sister, Clara, and falls – impossibly and illicitly – in love with her husband’s boarder, Captain Edward Bertram.

Then Clara is abducted from one of the busiest streets in the city. Olivia is told it’s thieves after ransom money, but she’s convinced there’s more to it. As she sets out to discover what’s happened to the sister she’s only just begun to know, she falls deeper into the shadowy underworld of Alexandria, putting her own life and her chance at a future with Edward, the only man she’s ever loved, at risk. Because, determined as Olivia is to find Clara, there are others who will stop at nothing to conceal what’s become of her….

“Beneath a Burning Sky” is Jenny Ashcroft’s debut novel, and boy, what a great debut it was! Gently and beautifully written, full of mysteries, romances, love, hate and intrigue, with characters that you are rooting for, mixing historical fiction, romance and mystery. It is full of hidden passion and intrigues and it truly surprised me in a very positive way – I’ll be honest, I haven’t expected it to be so good.

The characters are better than good. You love them or you hate to love them, but even those that you hate, you can’t stop thinking about them. There are many of them, to be honest, and I had some problems with recognizing and distinguishing them, especially the Egyptian protagonists. There was also the sub – plot of Nailah and her family and to be honest it was this tad difficult to understand what her role in the story was – that is, till almost the very end but it was a little too late then. However, this in a great way showed the difference between the British class and the local people. Olivia is a great leading character – she is, as it usually happens, much ahead of her times, she’s independent and feisty but there is also a lot vulnerability in her character. She really grows throughout the story. She changes and develops and it was great to see how much determination there is in her and how brave she faces all the challenges – and there were plenty of them. Alistair – well, I hated him, but I think you were supposed to hate him. Edward is a total contrast to Alistair – romantic, lovely, and charming gentleman and I couldn’t wait for more scenes with him. The forbidden romance was written in a very interesting way, and you can’t help but fell for both of the characters – for the heroine because you just felt sorry her and for the hero because he’s just so lovely and you keep everything crossed for them and hope for a happy ending – but will it come?

This story was full to the brims with events and happenings. The setting was unusual for me – I think I’ve never before read a book set in Egypt in 1890s, but it only made the reading more exciting and interesting for me. The mystery of Clara’s missing, the who, and why, and when, and what happened was seamlessly flowing and was really intriguing. And of course the romance, or should I say, the love story – it was just brilliant. Yes, I had some troubles with getting into the book, it took me some time to get used to the writing style, the inner dialogues and the descriptions, and some of the characters were too clichéd and stereotyped, but then it just made click and I couldn’t put the book down. Also, there were moments that I’d love a little bit deeper info, for example about Olivia’s parents and is it only me or did you also miss the explanation why Millicent hated Olivia so much? But the author has so easily and effortlessly brought the atmosphere of those time, and the descriptions were so vivid, bringing everything to life. There were many twists in this story, and most of them were really unexpected, and I just wanted to turn the next page and see what’s going to happen. The plot was complex but I’ve actually never felt confused – it was logical and everything had its place. The story slowly and steadily unpeels the many layers and uncovers various secrets and all the pieces of the puzzle come together in the end.

So altogether, “Beneath a Burning Sky” was historical fiction at its finest. This was a brilliant, addictive, fast – paced read with characters that really grows on you. The author has easily pulled me into her fictional world that will truly stay with me for a long time, and this is really a sign of a great book. I am already looking forward Jenny Ashcroft’s next book and in the meantime I can only highly recommend this novel to you.