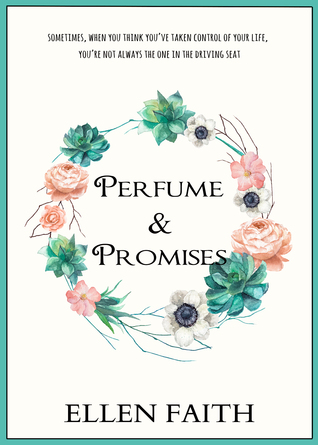 Chloe Richards is a small town girl with a big heart. At least, that’s what the local folk of Rosehip Village think. But when her parents turn up on her doorstep asking for help, her secret past is about to be revealed.

Being the daughter of Hollywood royalty was never going to be easy, but at 19, Chloe Richards managed to leave that life behind along with the scandals that almost destroyed her. A fresh start was all she needed, and a fresh start was what she got in Rosehip. Girlfriend of a local bookshop owner, best friends with fiercely loyal café owner and owner of a perfume business herself, Chloe has a happy life. But her parents are about to turn her perfect life on its head. Again.

What do you do when you’re torn between loyalty and protecting yourself? Should you trust your heart when your head is telling you not to?

„Perfume and Promises” is my third book by Ellen Faith and I loved all of them. I love her writing style and the way she tells her stories, they are filled with difficult, important issues but they are also incredibly, incredibly humorous, full of brilliant, sharp one – liners, quirky, lively characters and really, every new release from Ellen is like a real treat.

I loved characters in this story, all of them, no matter if they were to love or to hate. They were all larger than life personalities, likeable and relatable, incredibly funny and warm people. Chloe – lovely, feisty girl who lost herself a little when she was younger, and finally decided to leave everything behind and start a new life, totally on her own, independent. Chloe is one of this characters that you have no problems to connect with and you only like her more and more making your way throughout the story. She was great, but you wouldn’t like to get on her wrong side, believe me! What I so much liked in Chloe was the fact that yes, sometimes she just run away from the difficulties, but she was also able to pick herself up and look positively into the future. I loved what she did with her life and that she found a thing that she loved, which was really unique – creating perfumes. She wanted to put the past behind her, to forget about the really bad times, about all the awful things that she experienced, and stand on her own two feet, without anybody’s help. It was great, because I think that mostly people, if put into her shoes, would rather stay and change nothing and live along comfortably with their parents’ money. And I also adored that she loved her parents so much and that she wasn’t too embarrassed to show her feelings, and also to stand for her parents, even though she all the time suffered because of the past.
Now, I couldn’t stand Billy. I couldn’t, period. From the very beginning. There was something sleazy in him that just pushed me away from him, there was something false, and with every new scene that he entered he just confirmed that my gut feeling is right again. I don’t want to write more, as I don’t want to give up too much, but let me tell you that even with me smelling a rat somewhere I didn’t expect for this subplot to end in this way. And my heart went to Chloe, really. I more than once wanted to shake him or bang his head on the wall – I couldn’t believe how cruel, unfair and childish he was towards Chloe. Actually, almost in every scene that he entered he did something to just put me off him even more and I couldn’t stop wondering what is this that Chloe sees in him.

This is a story full of many different emotions. I fell for Chloe, and I was really impressed with how well Ellen Faith can write emotions, how real they feel. It is also full of incredibly surprising twists and turns, and even though I started to suspect something when Chloe’s father mentioned something for a second time, I still was waiting in awe for the grande finale that came and took me totally by surprise.

There is one little, teeny tiny thing that didn’t let me sleep, and I know it sounds foolish but Rosehip was a village of sixty – something people. And it was quite lively, with shops, restaurant, bookshop and even a spa. I am living in a village with something over 150 people and we have the volunteer fire (mini -) brigade and one guest – house and the baker and butcher come once a week with a van. Forget the post, and many of my neighbours would ask what spa is. Also, we don’t have weekly meetings in a hall (maybe because we don’t have a hall) and honestly, the only thing that keeps me sane about it is the fact that Rosehip was somewhere on a tourist route, a hiking trail, because other than that I can’t imagine it being so small and people being able to keep their heads over the water with their shops. But other than that, I loved Rosehip, and I didn’t have a problem to understand why Chloe fell in love with this place. And I of course absolutely adored this brilliant sense of community, and the residents supporting each other no matter what.

It started really intriguing, the pace was quick, but then it slowed down a little and I had a feeling it drags on too much – I mean, the thing with the secrets has annoyed me a little, with Billy being recognized/ not being identified, and some of the things in the book happened very conveniently, like for example the appearance of Reilley. Every once in a while Chloe comes a little too childish, too undecided, but those were only moments. The author has also very cleverly sneaked into the story the impact that social media can impose on our lives, and even though this time it has touched upon our Chloe personally, the celebrities’ daughter, it is a problem for many, many people nowadays, and I always hope that perhaps, after reading such stories, one or two young persons will think twice before losing themselves into the cyber – world. Apart from this, „Perfume & Promises” is a lovely story about family relationship (even though it is an unusual family), about trust, about looking forward, about loyalty and friendship, written in a lovely, engaging way, full of funny but also moving, scenes. Recommended!

BE SURE TO CHECK OTHER PERFUME & PROMISES BLOG TOUR STOPS FOR REVIEWS AND GUEST POSTS!